I read two Bethlehem stories this morning.
The second story is the one you think about when you read the word Bethlehem.
On Christmas we most often think of the Babe wrapped in swaddling clothes.  But, Who is this King of glory?  The LORD strong and mighty, the LORD mighty in battle... Who is this King of glory? The LORD of hosts, He is the King of glory.
Ironic, then, how my reading this morning first took me past a different Bethlehem story- A story of war.
Seems David is tired of being cramped up in a cave, and has a moment of longing for some water from a well that is in the center of an enemy stronghold. Three mighty men hear the wish, and for the happiness of their king, risk life and limb to bring back a canteen.
Imagine the scene when the call for reinforcements goes out- “There’s been a breach in the guard. Three men are in the camp...!!” The forces descend.
The three move through the swarms of opposers like a well oiled mower through tall grass- until they reach the well.  Perhaps one has the flask and dips down while the others cover his back.
Task half accomplished. The flask is full, but the king doesn’t have it in hand.
The canteen is slung over a shoulder, the sword gripped in hand.  The three fight out. And I thought I was brave? Crazy.
Now fast-forward. Here comes the pretty story we all first thought about.  Same streets. Same well.
Instead of cries of war, come cries of worship.  A babe is born- A King.
Instead of desiring to receive water, this King wants to give it.
Instead of needing someone to bring it, He needs someone to take it and share it.
You and I overhear His longing.
Who is as mindless of life and limb, and as passionate about carrying the canteen into the enemy camp- this time not to fill, but to pour out?
Who are the mighty three, or four, or ten thousand who will take on an army for the happiness of that same King in the cradle?
I guess the Christmas story reveals not just the most incredible gift, but a most incredible opportunity. Makes me think through the story of Bethlehem twice. 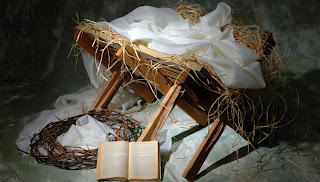