The Tale of Two Stones


The house finch warbles from downstairs- it’s 12:00. I flip shut Cost Accounting, grab my journal and another book and head for a spot of prayer.

After some time I open the book. The last few paragraphs of the last chapter, parable style, arrest my attention:

“A story is told of Jesus and His disciples walking one day along a stony road. Jesus asked each of them to choose a stone to carry for Him. John, it is said, chose a large one, while Peter chose the smallest.

“Jesus led them then to the top of a mountain and commanded that the stones be made bread. Each disciple, by this time tired and hungry, was allowed to eat the bread he held in his hand, but of course Peter’s was not sufficient to satisfy his hunger. John gave him some of his.”

Tch tch tch- I saw this one coming. You should have taken a larger stone. My mind flashes out commentary on Peter’s plight as the story unfolds.

“Some time later Jesus again asked the disciples to pick up a stone to carry.”

My mind rushes wildly again. Remember, man, I thought, the small stone’s worth wasn’t even enough to satisfy your own hunger... 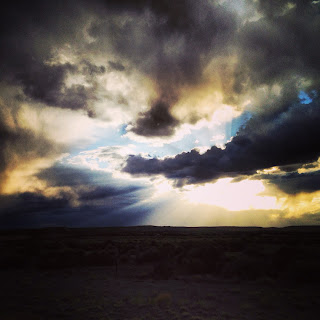 But of course it makes sense. John had enough of the blessing for himself AND a brother, and maybe more still. Peter, because of his shortcut on commitment, came up shy, and would have gone hungry. This is going to be another 10-virgins-and-their-lamps story, right? Right...

“This time Peter chose the largest of all.”

I knew he would. Honestly. I would have too.

“Taking them to a river, Jesus told them to cast the stones into the water. They did so, but looked at one another in bewilderment.”

Of course!.. Something told me this still wasn’t going to work out. Jesus is about to pull out some poignant lesson for poor old Pete.

“For whom,” asked Jesus, “did you carry the stone?”

No. It was about Jesus.

Tears well. I was caught in the crossfire. Guilty.

Peter chose his first stone for comfort, and his second for bread. John chose both for Jesus.

What size stones are you carrying?